Skopje is the capital of the Republic of Macedonia - the City that lies in the heart of the Balkan Peninsula. Located at the crossroad of important communications, a city with 2000 years of tradition. Skopje is a modern city with a population of almost one million, and presents Macedonia’s major political, economic, educational and cultural center.

The town is situated with the beautiful quay of the Macedonian river “Vardar” which flows through the city center. Walk along the narrow streets in the Old Bazaar, which happens to be the biggest bazaar in the Balkans today. Skopje is internationally famous for being the birthplace of Mother Teresa.

Skopje has many attractive tourist destinations including: fortress, many cultural and historical monuments, archaeological sites, sport halls, and a lively night life.
There are caves in the canyon of the River Treska as well as Lake Matka.

If you like to hike you can visit Vodno Mountain and Millennium Cross the highest point in the city.

If you’re looking for a relaxing day, there is a health spa with mineral and thermal baths in the eastern part of the city/ village Katlanovo.

Hostels in this city 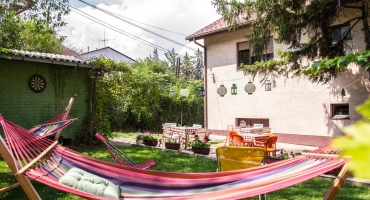